Omni-directional robots (sometime called holonomic robots) are platforms designed to allow a wide range of motion thanks to their wheels mechanically designed to allow lateral sliding motion. You can find such design in our open-source Robot Soccer Kit for instance.

Even if less intuitive than their differential (2-wheels) counterpart, the kinematics model of such platform is arguably easier to derive, and they are easier to control since the motion is less constrained. This is what we are going to explain in detail in this post.

To focus on kinematics, we will consider the motors as sources of velocities. The very first question we might ask is: what are the nature of velocities our robot could possibly achieve? 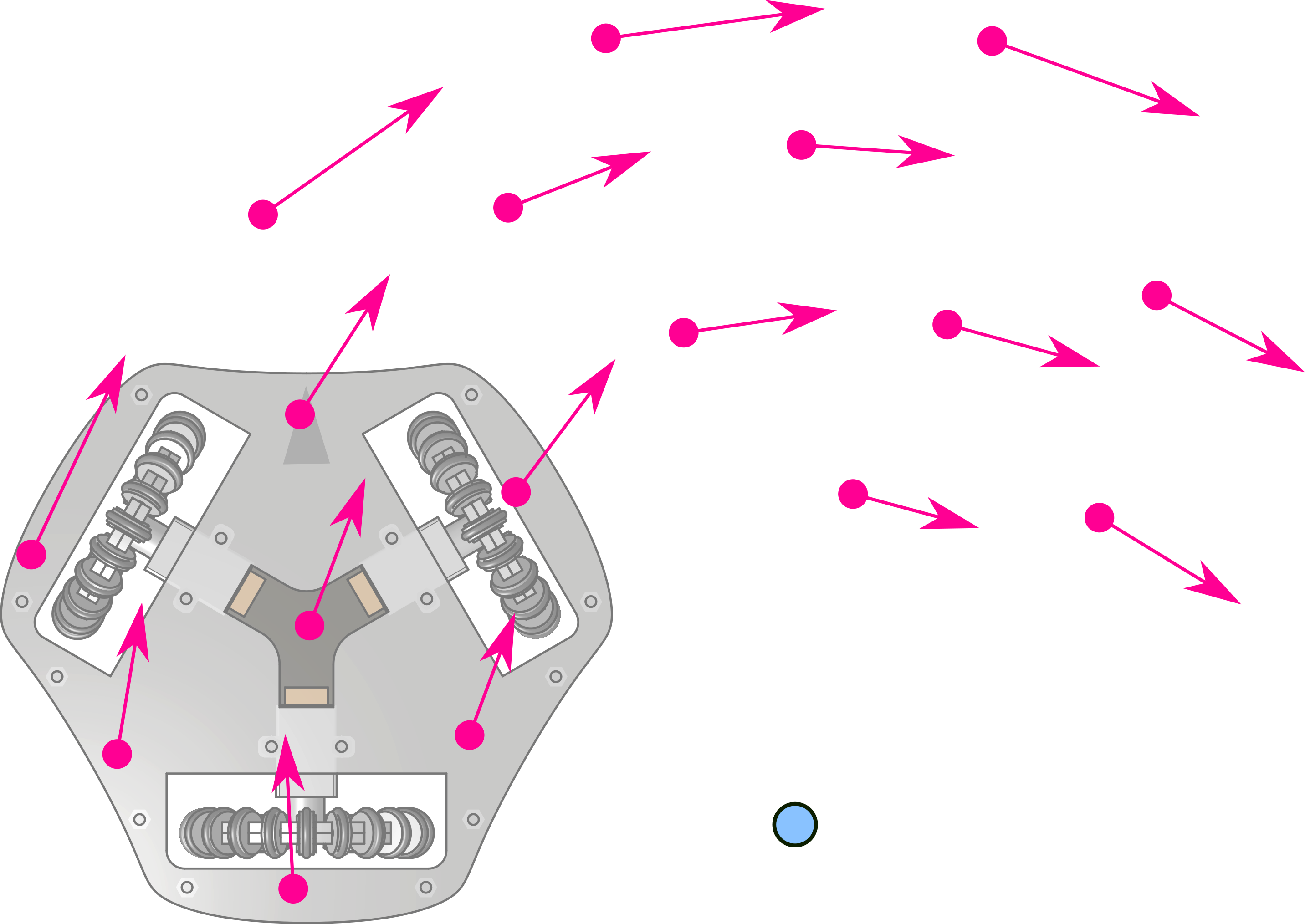 What we see here is a field of vectors describing the velocities of points attached to the rigid body of the robot. Note that these points can be immaterial (they are not necessarily part of the robot, but they move with its body).

Before we go any further, we will remind basic tools that are important to derive robot kinematics.

First, let’s define an axis of rotation \(\vec \omega\) as a vector which orientation indicates us about which axis we are rotating, and which norm is the velocity of rotation (in rad/s).

Suppose a point \(P\) rotates around this axis, and we know some point \(O\) belonging to the axis (thus, its velocity caused by the rotation is zero). Here, the so-called vectorial cross product, denoted \(\vec \omega \times \vec{OP}\) gives us the velocity of the point \(P\): 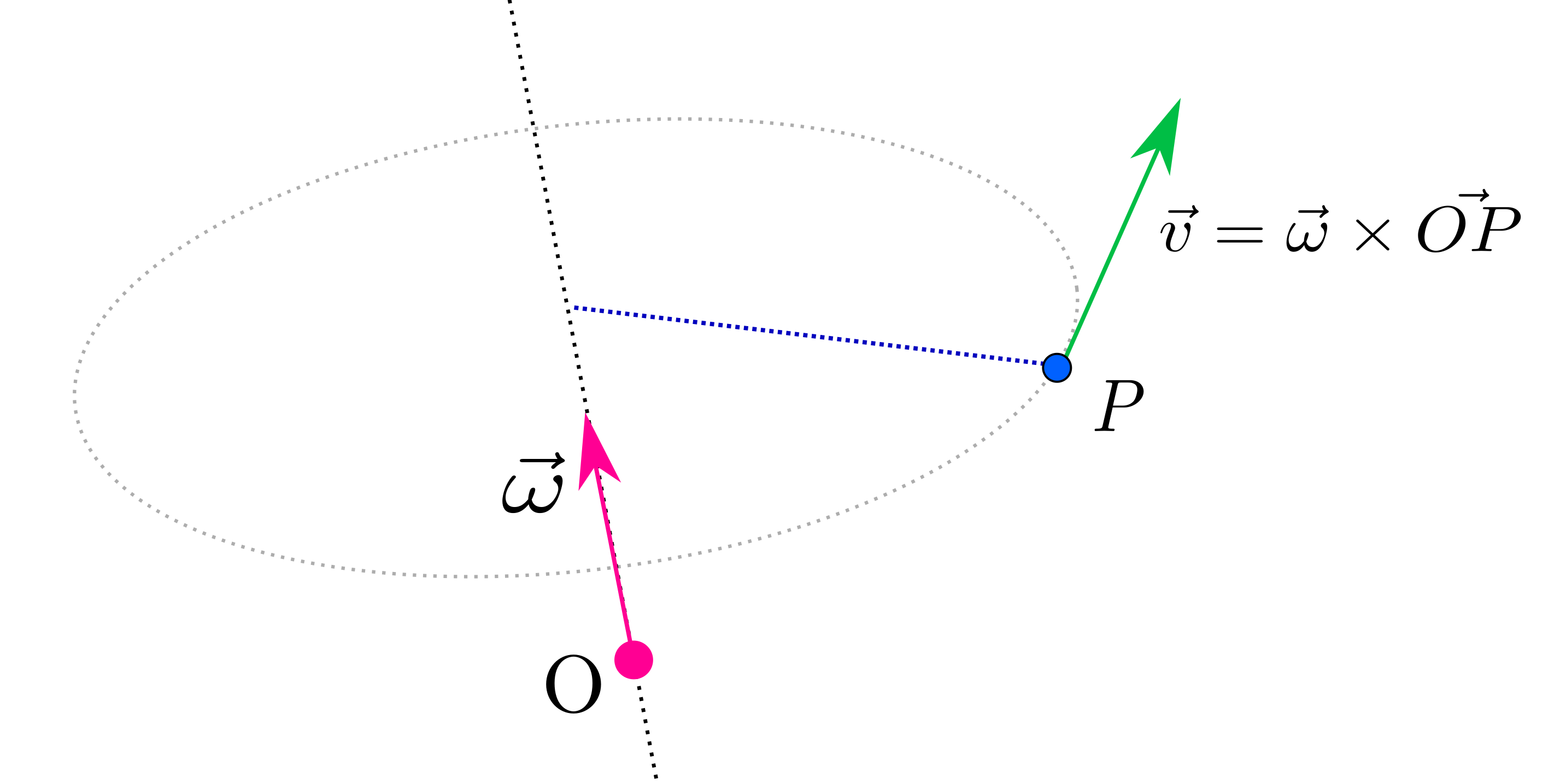 This cross product can be computed as:

We can show that this operation is distributive over addition. 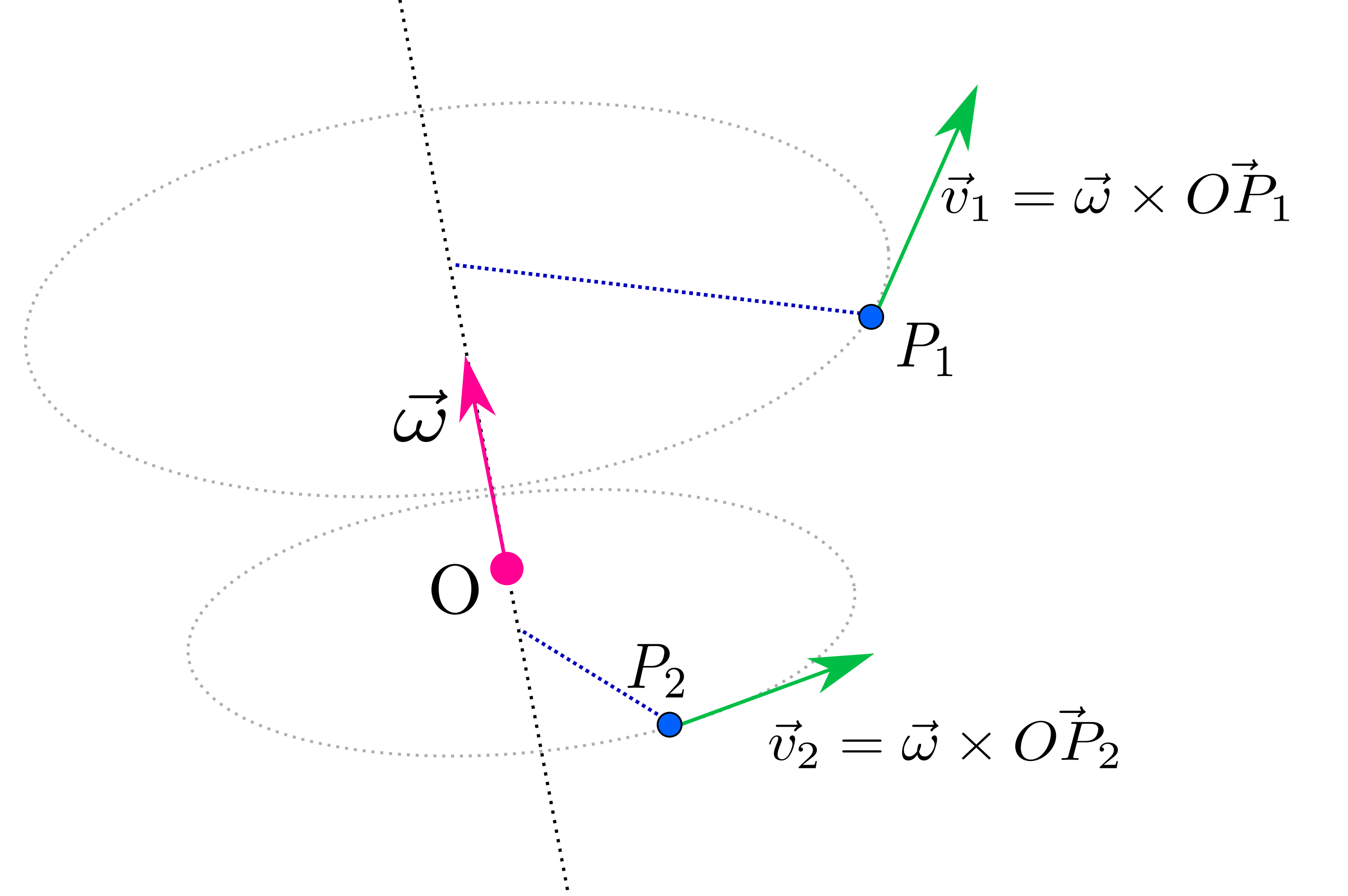 This equation is sometime refereed to as Varignon’s formula. This result is a core tool of screw theory which is extensively based on this transformation.

You can also notice that this also works for pure translations: since the cross product will be zero, the velocity will be the same for all points.

When we build our robot, we know its geometry, it can be parametrized using the following values: 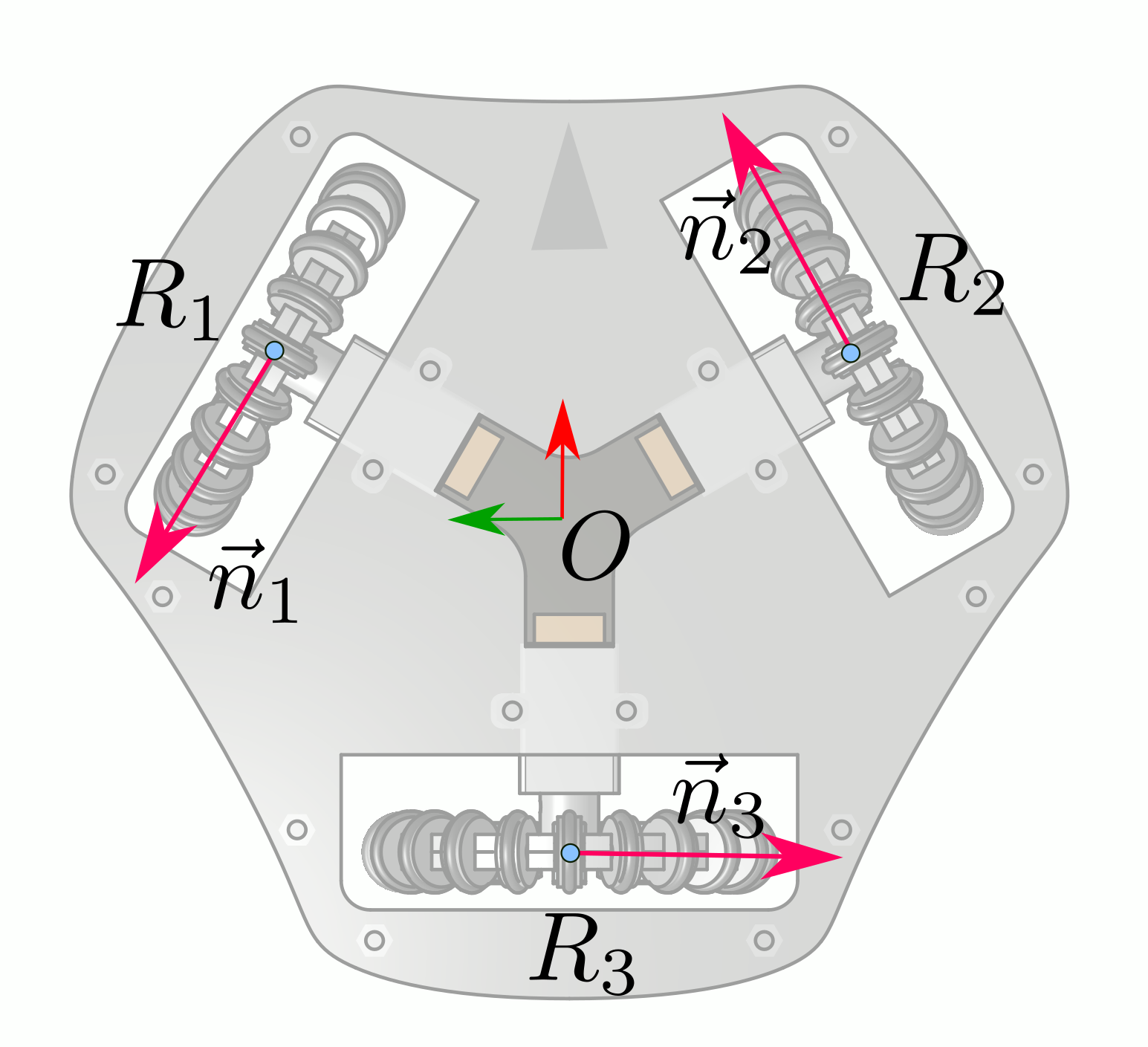 We’ll start with our desired velocity, that we will express in the chassis frame:

In 3D, our goal is to reach the following chassis velocity (expressed in the robot frame):

With \(v_o\) being the velocity of the robot’s origin and \(\omega\) the robot’s rotation velocity. The zeros are here because we are in 3D (the robot is not moving upward and is not tilting forward or laterally).

Thanks to Varignon’s formula, we can now express the resulting velocity in the wheels:

We can now compute \(w_i\), the component of this velocity that is in the direction of the wheel, using the dot product with its drive vector:

We obtain a linear relation between the target (chassis) velocity and the linear velocity of a wheel.

Since everything is linear, we can then express the velocity of our wheels as a linear transformation of the desired chassis velocity:

Note: if the motor drive direction is perpendicular to the position of the wheel, then \(M\) can be simplified to:

Where \(d\) is the distance between the wheels and the center of the robot.

If \(M\) has a full rank, it can be inverted to deduce the chassis velocity from the wheels velocity:

This is the direct kinematics model. It can be used to compute the odometry of the robot for instance.

One way to model the motors physical limitations is to consider that they can provide velocities under a given maximum limit, say \(w_{max}\).

If we don’t take care of this limit, and increase a target velocity \(s\), we will first saturate the velocity of one motor (say \(w_1\)), and the velocity of other motors will continue to rise. This will have the effect of getting the robot to move in a different direction than the one initially desired.

A geometrical view of velocity limits

Another way to view the limits is to think them as a set of inequalities:

Such equations defines what we call a polytope, which is a particular type of 3D shapes. In this case, the shape is simply a cube. If we now express this constraint in terms of task space, we get:

Here, since everything is linear, \(M\) will scale and tilt the original cube. Here is the result for a robot with three wheels dispatched evenly at 120° (like the figures above):

Any point in this new shape is a valid velocity in the task space (a target velocity giving feasible wheel velocities). If we slice this cube where \(\dot \theta = 0\), we can visualize what velocities are possible to achieve when no rotation is involved (the violet area below):

You can notice that the cube gets here sliced to an hexagon (I personally finds this geometrical detail elegant, but it’s up to your taste!).

As you can notice, the robot velocity capabilities are not the same in all the directions. Actually, if you notice that velocity limits are reached when the target velocity is collinear with a wheel, you can intuite this hexagon: 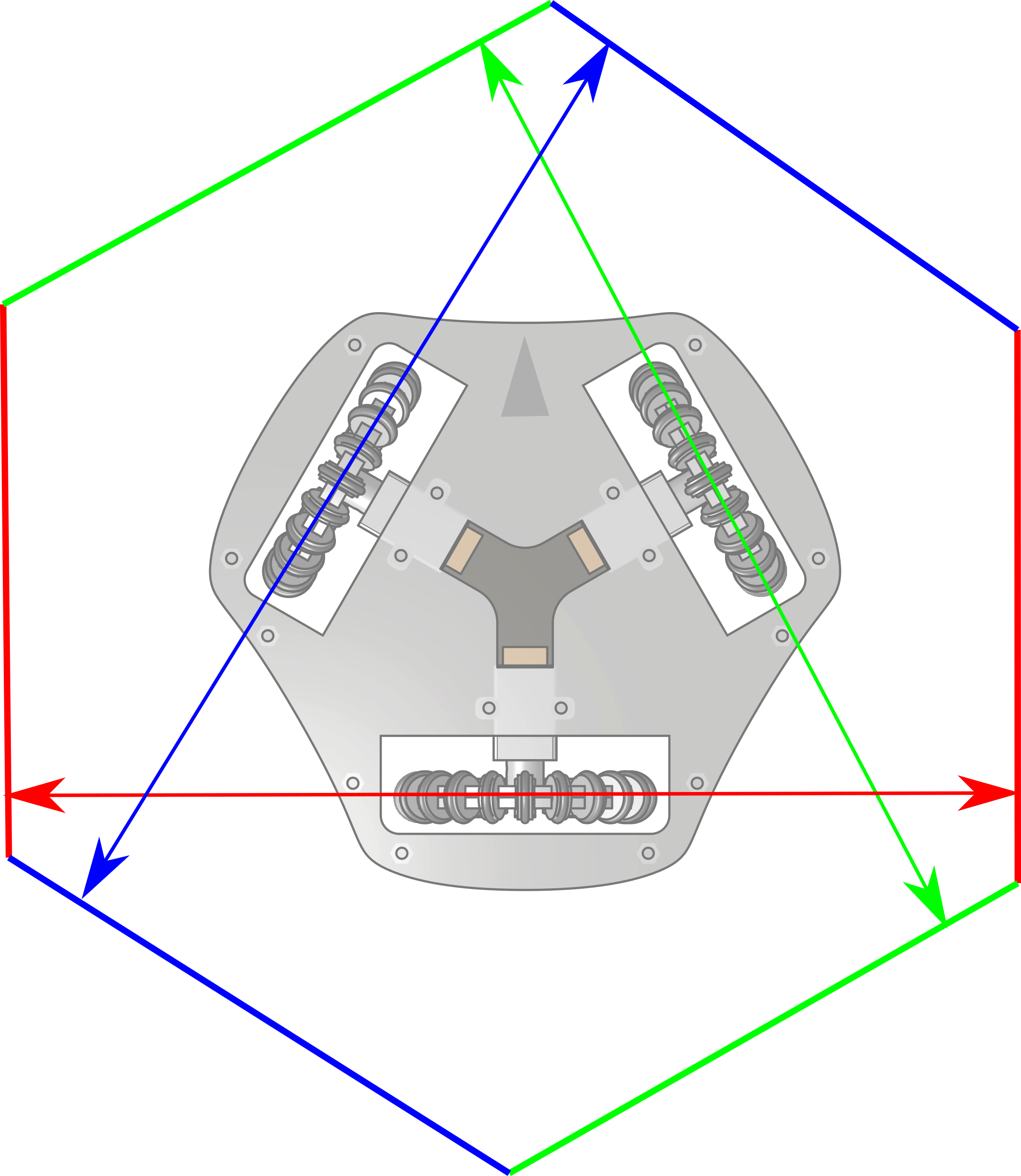 You can find here a link to the script I used to produce the above plots of the robot feasible velocities regions.

Thanks to Stéphane Caron for proof-reading, comments and typos feedbacks.